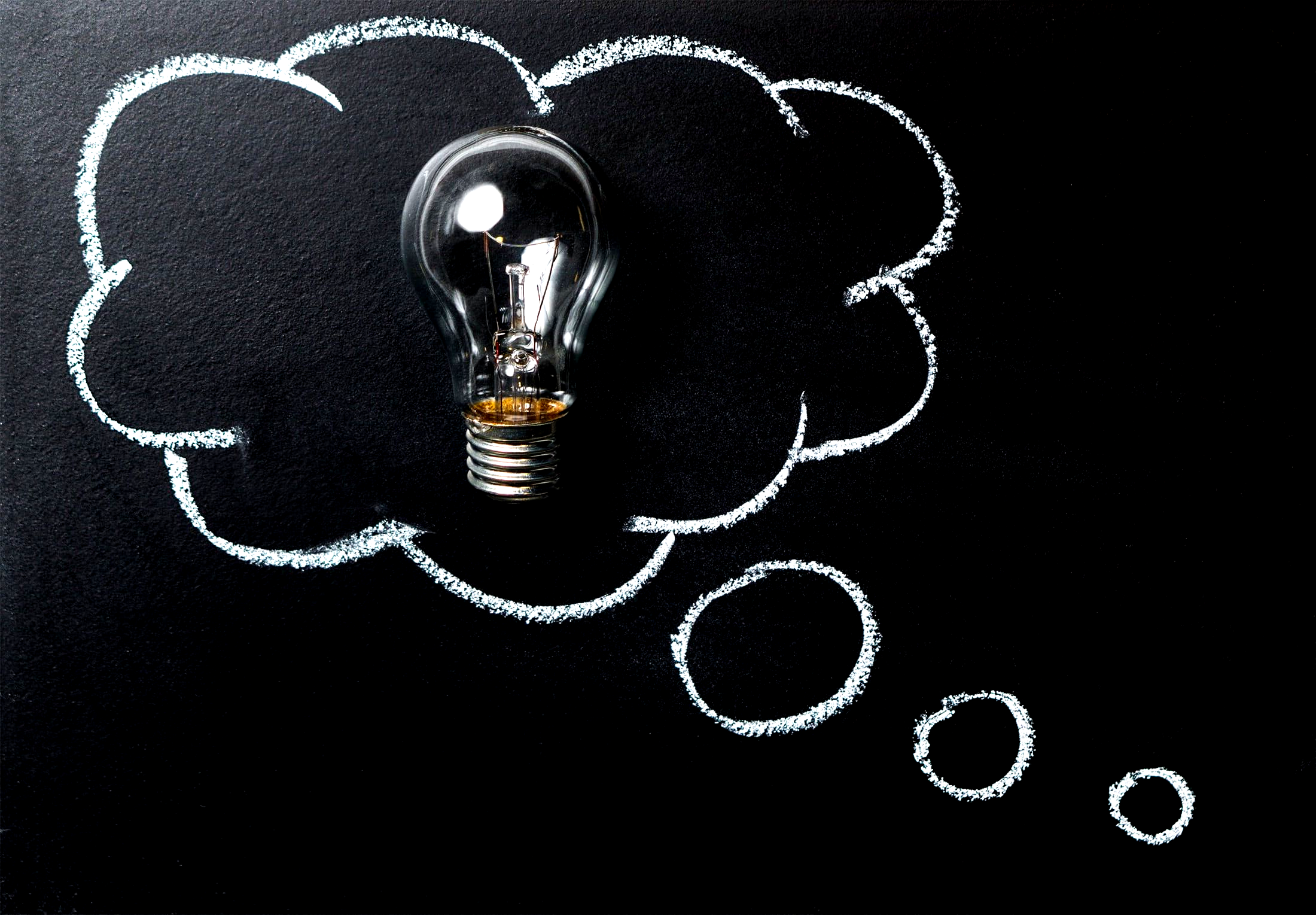 Brainstorming like most things in business is usually misunderstood and hardly performed at the level that the original authors intended.

Advertising executive, Alex Osborne, describes the methodology in his book, Applied Imagination. The keys to successful brainstorming are to strive for the number of ideas, not quality; withhold judgment, welcome wild ideas, and finally to combine and improve upon the ideas afterward.

Before you begin, I find that it is incredibly helpful when you enter into creative exercises if you are in the right headspace. That old dismissive phrase telling you to get lost “Go take a hike,” is literally what I do sometimes.  I get lost in the woods with my thoughts. I lose track of the other meetings, issues, challenges, and take the time to clear my mind. Then I can come back with what the Zen masters refer to as the beginner’s eye.

Put on the pantyhose. Wear the lipstick. +Richard Kaiser

Years ago, before turning into whatever he is today, Mel Gibson made movies that didn’t make people feel uncomfortable (or maybe they did and I didn’t notice). “What Women Want” was a rom-com where he played the macho advertising executive who was brilliant at creative for cigarettes and guns, but now had to try to put himself in the shoes of a female consumer. So he goes out and buys pantyhose and lipstick and in his fancy condo is literally falling over himself trying to put on these things. Not the best humor in the world, but it hits its mark on some level.

What I saw was the importance of LITERALLY trying to walk in the customer’s shoes.  What are their motivators, challenges, priorities . . . what makes them tick? What matters to them? And what matters MOST to them. Before you solve problems, you have to know what problems you are solving.

Set Up For Success

Like all things in life, the first several times of trying this… you’re going to be quite bad at it.  And that’s completely okay. I always imagine little Michael Jordan standing outside in the rain after being cut from his 7th-grade basketball tryout, still working on those free throw shots. Then I think of what that guy is doing today. If he’s just sitting still, he is still collecting thousands of dollars per second off of royalties of Air Jordans and to a much lesser extent, Space Jam.

Whether you’re doing this for the first time or the one-thousandth time, you need a facilitator.  Ideally, someone who has done this work before. Why? Because they know the rules and how to play the game.

Again, this is not Brain-Spreadsheeting. It’s unorganized, chaotic, and it is supposed to be. It’s not a pretty process. Here’s a terrible mental image for you: it’s everyone sitting around a table vomiting ideas. Uncontrollable. Like we all decided to do the sushi buffet at the truck stop in South Dakota uncontrollable vomiting. Ideas just coming from everywhere. Bill goes and he has ideas, and then Carol goes with ideas, and then Daquan adds some ideas vomit onto Carol’s, and after a while just when you thought you were done, nothing left inside… and then “heeeeaaawuha,” here come some more!

It’s such a beautiful thing.

This is where Osborne encourages us to go for quantity and to get out as many ideas as possible. Many ideas can trigger someone to have the BIG idea.

Whiteboards, Post-It Notes (the big ones 3×5, don’t be a tightass when it comes to something this important), easels with the big pad of paper that you tear off and stick on the walls, these are the weapons of choice. Because you never know when that “meh” idea from the first ten minutes might play off another idea from hour 3 and then BOOM!
Sharknado.

This is why it is CRITICAL to capture everything.

If you start working on a computer you will begin with the tools you know.  So if I start working on in Photoshop, I’m going to use the $45 worth of the tool that I know how to use.  But if I start by sketching my ideas out on paper, I am only limited by my own imagination. Then when I need to go into Photoshop, maybe I have to learn some more skills or tools, but the ideas are so much better.

This is why today, I keep Post-It Notes and Sharpies throughout the office and in my backpack at all times.  Because if I’m on a subway train with someone who is deeply passionate about how to solve Problem X, then by gawd, we are going bust out some Post-It Notes, Sharpies and get to work. 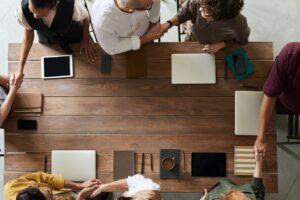 Many people refer to this as “back of the napkin” ideas. It’s because ideas can come at any time and sometimes you’re in a cafe and the only thing to write on, is the back of a napkin. Or you might run into the scenario I did with a friend, I didn’t have paper but I did have a Sharpie, so I rolled up my pants and started to draw out solutions on my calf. He still has the photo somewhere.

Keep your creative tools within reach at all times. ALWAYS carry a pen. You never know when genius will strike.

You’re starting with one main idea and then adding words or visuals that are related.  It is the cliche of the crazy guy in the movies trying to solve the case with photographs and red yarn linking things together.  But like so many cliches, it has become one, because it is true in its ability to work.

You see that patterns and associations. And it’s BIG and it’s in front of you. And you can lean against the table and stroke your beard while staring at it for hours asking yourself, “What does it all mean?”

And eventually, you see it.  That “Ah-ha moment” of greatness.

When TV personality Dan Harris tried to explain to co-workers at ABC why he started to meditate his go to was and is, “Well, because it makes me about 10% happier”.  Their looks of skepticism turned to interest. Later this became the title of his book and app that was created to help people learn how to meditate. It’s something that I continue to use in my life.

I also feel that this can translate into new ideas and inventions.  Whenever someone comes to me with their idea that is “like nothing anyone has ever seen before”… I tell them:

Because you’re going to spend half of your efforts educating why people need this magical thing that you’ve created to solve a problem they might not be aware that they have and the rest of the time trying to explain why they should buy your product or service.

Think of Google Glasses. It’s a cool concept, but it solved a problem that we don’t have and it made the early adopters who wore them look like fools.

Instead, I recommend finding a path that is 10% better than solutions that are already out there.  “It’s like this… but better.”

So in brainstorming, we are throwing out wild ideas, but in the vetting process, it is best to find things that are improvements on existing ideas. It is GOOD to have competition. They have already done the hard work of explaining why their product will solve a problem, the story that they have to tell is why their product is better.

If you want to get to 10% better you can look at existing solutions and how you can reverse engineer them.  How did they build it? Then take that idea and flip it on its head, turn it inside out. What if it was bigger (or smaller)?  How do we make it faster? How can the user interface be better?

There’s also mirroring or lifting… or to word it less eloquently: stealing.  “Chipotle, but for Asian food.” “Chipotle, but for pizza.” How can you disrupt a vertical by “making it look like Uber?”  We have a client reinventing the funeral industry because he used this approach and while I’m a little biased: it’s utterly brilliant.

Take a look at all of the ideas and then cluster similar ideas together, while removing any obviously bad ideas.  Analyze the remaining.

Create a matrix with weighted considerations (Impact vs. Time, Cost, Effort).  Quadrant as the time over the impact on a 10 point scale. Top left is quick wins, top right is long term impact, lower left is deprioritize, bottom right: kill.