Oh my God, what have I done?

More companies go out of business from growth than decline.

I wish I had learned in business school or more likely . . . I wish I had paid more attention if/when that was shared with me.

After nearly a decade of being a workaholic, I took a 30-day sabbatical to Hawaii.  It gave me a lot of time to reflect.  I was under the assumption that I was reaching the point of burn out; however, after ten days away I realized that I had burned out long ago.

I fell into a trap of thinking that everything that wasn’t work was time wasted.  I had stopped doing anything for enjoyment, the things that help a person recharge to be able to go at it harder, faster, stronger.  If you find yourself in a similar situation, I highly recommend reading the book “The Happiness Advantage” by Shawn Achor.  It helped me realize the self-destructive path I had created and also showed that I wasn’t alone idiot in doing so by providing examples from others who had chosen to follow the false narrative of “one day when X, Y, Z happens then I will be successful… then I will be happy.”

I created a bucket list, split into personal and professional goals.  I highly recommend this exercise to anyone.  Fill it with 50 items for each.  It sounds hard when you first start but fills up quickly.

Side story: there was an amazing moment that happened while I was in Hawaii.  I met this amazing woman who took me to many of the areas of the island that only locals would go to.  She taught me to surf, how to free dive (which is terrifying) and also how to get onto the Stairway to Heaven, a hiking trail now illegal to hike because of the numerous mudslides that have made a difficult hike more challenging.  It makes several lists for the most dangerous hikes in the world, less because of the physical danger and more because of the $2,000 fine if you get caught and the $2,000 helicopter rescue if you can’t make it out on your own.

I’ve never been much of a rule follower… so I knew I needed to do it.  My new friend said she knew how to get past security, which is basically running at a dead sprint while yelling back to the security guard in Russian.  Ridiculous, but effective.

I should point out there exists a fairly substantial difference in athletic ability between the two of us.  She is a former model turned fitness coach.  I was overweight and winded after a 50-yard dash from the aforementioned security guard. So it was inevitable that at some point on a trail which is almost entirely vertical climbs the equivalent of going up a ladder for several hours that we would reach an impasse.  Me: pouring sweat and panting like a dog in heat.  Her: not even winded. 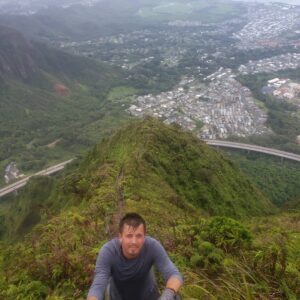 “We’re a third of the way to the top.  Here’s the deal: you can go slow, but you will not stop again until we reach the top.”

Two things happened at this moment:

So as you might have guessed: we made it! We climbed to the top.  It was my first experience of hiking INSIDE of a rain cloud (which . . . thank God, because then you really couldn’t tell what was rain and what was the profuse sweating).

The amazing moment: it wasn’t reaching the top.  It was the realization that she was right.  Stopping for breaks wasn’t helpful.

To this day I reflect on that lesson almost daily.  There’s a wooden fish hook that hangs in my car to serve as a reminder.  You can slow down, but you don’t stop (in life, not as applicable to driving, but hopefully you get the idea).

I returned with a clear perspective of the organization, I realized quickly that we were in danger of becoming another statistic.  Another company that was going to go bankrupt from success.  The prevailing issues were obvious: culture and cash flow.

Trust and tensions had been escalating between the management team and myself for months.  To make matters worse there was a culture of distrust and siloed communication.  They had created a culture that felt like death.

The management team had also maxed out the credit line (at a 30% interest rate), meanwhile there was more than enough in Account Receivable to cover.  There simply wasn’t a process for collections.

It took only a few months to wreck our company’s culture.  Experts on the subject suggest that it can take up to 5 years to correct a culture.  Intuitively I knew that I didn’t have that kind of time.  We would be out of business in a few months without aggressive changes.

When you have a cancer in your organization, don’t use a scalpel, grab a machete.

By the time that I had landed back in Ohio, I knew what I needed to do.  The entire management team was going to need to be terminated.  I needed to resume full control over finances and operations to stabilize the business and the only way to do that was going to be with the full support of the core team.

I want everything that’s wrong with our company up on the boards.

It was a brainstorming exercise.  I pulled in team members in small groups and had them cover the 32 whiteboard panels in the war room.  Nothing was to be held back.  Every criticism was to be laid out in an open and honest way.

What are the things that are preventing you from executing at your highest levels?
What pisses you off?
What tools do you need to do your job better?

With every issue and idea covering the walls, we collected them into a spreadsheet, grouped like issues, and then began to prioritize.  Everything was weighted on a scale of 1 to 10 on two criteria: Lift and Impact.

Lift: How much time and capital needs to be invested to course-correct?
Impact: What is the overall impact to the business?

These two points were then plotted onto a chart.  Anything that was deemed low lift, high impact was determined to be break fixes to be corrected on a 30-day timeline.

This was the tool we used to prioritize over 100+ items that needed to be enhanced, changed, or gutted from our processes and/or culture.

The list included simple things like “give more shoutouts when people bust their ass” to “more options for coffee creamer”.  It included harder conversations on which clients needed to be fired and how I had failed in my responsibilities to lead the company.

Rapidly implementing changes into an organization comes with a cost.  While being a death-like culture is hard, feeling like the carpet has been pulled out from under you is even harder.

I knew there would be heavy casualties involved in my plan.  There would be an almost alarming rate of turnover in staff and contractors.  I also knew that this moment would be where we would find out very quickly who was committed to the mission and who was here for a paycheck.

“Those that got you here, won’t get you there.”

The first mistake was in thinking that people could grow at the same pace as the company’s growth.  It simply wasn’t logical.  Out of the 5 original team members, there is only 1 that showed the fortitude to survive the changes that were implemented.

The second lesson learned was that I can’t project my goals for people onto them.  They need to want it.  BAD.

The sole survivor, Josh Moody, was also the first hire at Wilderness Agency.  He is a rare breed.  He has worked into the early morning hours to hit deadlines, never complains, and can recite the mission of the company at any moment.  There is no question in my mind that we wouldn’t have made it through that period without him guiding the team forward.

What have I done?

Self-doubt and entrepreneurs go together like awkwardness and teenagers.  There were many points where I questioned if the company and people would survive months of enduring change on top of the already aggressive project deadlines we were up against, while course-correcting months of projects that dragged because of ineffective leadership.

There were times when I dreamed of escape.  Throw in the towel.  Move to the Caribbean and sell fish tacos on the beach.  I had dreams about it.

But then sometimes, I would think…

“Well, maybe it will work out.”

For 2019 we were the #1 fastest-growing company in Dayton according to the Dayton Business Journals report and this year we were identified as #2.  We have been nominated for the DBJ Business of the Year award and received the Better Business Bureau’s Spark award for integrity in community, culture, and character.  It’s been a windfall of recognition that is truly humbling.

The real measure of success for me was that amidst the largest period of economic uncertainty in the past decade: we didn’t lose a single retainer client.  Not one.  Some of our future projects were put on hold, but not one client stopped their ongoing marketing efforts. The significance is that marketing is historically the first budget slashed in a downturn.

To me this was a clear indication that our clients were seeing the value that our team was providing to their bottom line.

The next thing that happened: we noticed a spike in inbound leads.  There were and are companies that are using this moment to restructure their marketing efforts.  I continue to use the analogy of an Indycar race:

“We’re in a caution lap, that flag is going to go green.  When it does is when you can overtake your competitors.”

The changes haven’t stopped.  The list still exists, but today there are only 10 or so items on that list.  A lot of the problems fixed themselves when we fixed the culture.

I’m forever grateful for the team that has weathered the storm with me.  We are better and stronger for it.  Even in these hard times, there is so much potential for our little Midwest agency.

Whether it’s re-evaluating your marketing efforts, your operations, business model, or your personal life… this moment, “the caution lap”… it’s a gift.  Use it.

Change is hard.  At times, it’s downright terrifying.  But if you believe in yourself and the people around you, you can do some really crazy shit.